Santa Ana Zegache is a beautifully restored church in rural Oaxaca. It is a showcase for the restoration work carried out by the Fundacion Cultural Rodolfo Morales. In the early1990s Rodolfo Morales, the internationally known Oaxacan painter, returned to his native valley, just south of the city of Oaxaca.

In the last decade, until his death in 2001, he devoted much of his income and resources to the conservation and restoration of historic buildings in the area with the help of the architect Esteban San Juan. These included the churches of Santo Domingo Ocotlan, and especially the 17th century village church of Santa Ana Zegache nearby.
The "earthquake baroque" church front is designed in the classic Oaxacan manner, its prominent retablo facade sandwiched between squat but massive towers designed to resist the frequent temblors that afflict the region. The facade has recently been repainted in bright, contrasting colors that emphasize its main features: tiers of shell niches housing religious statuary framed by prominent, fluted columns.

The striking exterior of Santa Ana Zegache is only exceeded by its beautiful interior, whose meticulously restored nave is a treasure house of painted baroque decoration, gilded altarpieces and carved stonework. Walls, windows, archways, pendentives and friezes are decorated with floral and figural images, many elaborately framed by rocaille, strapwork, foliage and scrolls in a refined palette of reds, greens and earth colors, generally more muted than the bold hues of the facade.
Read More 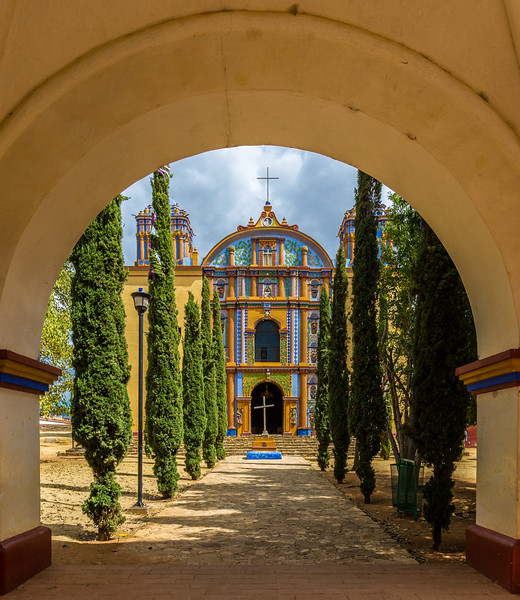